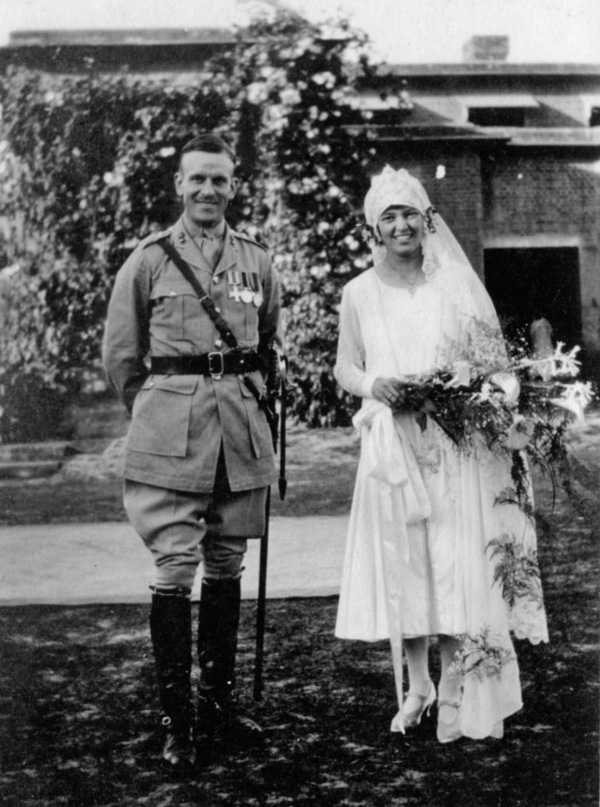 Cyril George Hooke married Elaine Marian Oakden at Meerut in India in February 1926. They had been engaged for nearly three years. Elaine had lived much of her life in India whilst Cyril had lived there for about five years, serving in the British Army in India.

Elaine, my granny, kept diaries throughout much of her life. In these she does not express much of her feelings, instead they provide a good record of what she did and where she went each day. However, the delight at her engagement does just break through in the diary entries leading up to that moment in 1923 when she and Cyril decided, and were permitted by her parents, to get married.

During this year she was living in Fyzabad, Uttar Pradesh, a city where Cyril Hooke had been stationed since 1920.

A few days later on 28th February she reports the names of a group of 12 of them who met at the club at 7.30 for a moonlight picnic at "the Temples". I think the Temples are people. She lists all the names concluding with "D, myself and Mr Hooke. We went in three boats up the river and had dinner on the sand and afterwards we played about and sailed down about 11. Had a gramophone. Got to the Temples at about 12 where we had supper and then we 4 girls drove home."

The following morning begins, "Went for a ride by myself before breakfast." I wonder what romantic thoughts she might have been entertaining that morning!  However, other entries in early March refer to her riding with  Capt Cox. Mr Hooke is not mentioned again until 10th March when she reports that she went to the Fancy Dress Dinner and Dance and dined with Mr Hooke, Capt Cox, the Ronaldsons and Jennings and "had a very gay time. Got back about 2.30."

The following day, a Sunday, 11th March 1923, after church and lunch she went for a ride with Mr Hooke but as the police were out looking for a man who had been killed by villagers "Mr Hooke went on the Manja and with some men of the battery."

2nd April 1923 (Bank Holiday) begins: "Mr Hooke and I went for a ride before breakfast and he did some tent-pegging..... I played golf with Mr Hooke and after that we went to see the battery horses."

Wednesday, 4th April 1923 was a very significant day for Granny and indeed for all of the succeeding generations of Hookes! I will let Granny describe it.

"Mummie came to the club later, and I drove the car home.Then I dined with Mr Richardson, the Barretts and Mr Hobart & Mr Hooke were there. After diinner M called for me in the carriage to go to the battery dance. Mr H came with us.He asked me if we could get engaged and we are going to be. M sat in the carriage most of the time and we got back about 1.30."

Of course, an engagement had to receive the approval of Granny's parents, Ralph and Rosa Oakden, Here Granny tells us what happened on the following morning with a rare expression of her feelings as Mr Hooke ibecomes Mr H and then Cyril in her diary entries:

"I went out riding before breakfast with Mr H, who did some tent-pegging. He came to breeakfast and saw Daddy & Mummie, who said we two could be engaged. We are both awfully happy. He left at about 11. In the afternoon I played golf with the Ronaldsons & Mr Richardson. Capt R and I beat the other two. Went to the club afterwards. Cyril came with us in the car and stayed for dinner and then we two went round the garden afterwards. He went about 10.30."

"M & I went for a ride up to the golf course. There was an east wind and it was very warm. In the afternoon I played tennis with Mrs Plate, Cyril & Mr Robertson. Mrs P & Mr R beat us. The rest of the family came to the club later. Mrs Mudie came to stay for a few days. Took Mr Orben & Mrs M to the dance at the Punjabi mess. Had a very nice time. The grounds were decorateed with Japanese lanterns. We got back about 2.30."

On Saturday everyone got up late and "C & I sat on the roof for a bit."

Wednesday, 11th April was another notable day as Cyril presented Elaine with an engagement ring. On Monday Elaine had driven him to the station so he could travel the 80 miles from Fyzabad to Lucknow by train to purchase it.

"Went for a ride before breakfast. Wrote mail letters most of the morning. In the afternoon I played tennis with the Dowlands & Capt. Cox at the club. After that we sat under the ??? for a bit. Then Cyril came and we sat on the roof and he gave me the ring with a ruby in the centre and a diamond on either side of it. Then D & I went back in the car. M & Daddy came later. D & I dined with the Barretts, the Ronaldsons, Douglas'  Mr Wright Lucille. Mr Robertson and Cyril were there. Had a very nice evening with singing etc. Got back about 12."

"Went for a ride at 6.30, it was quite fairly cool. Inthe afternoon M & I wnet to the club and Cyril and I played a single at tennis. Later on he had a telegram to say that he was to go on a Physical Training course to Kasandi and leave on 18th. He came to dinner."

On Wednesday 18th April we read another expression of feeling as Granny writes:

"I went for a ride by myself before breakfast. Wrote letters afterwards. C came to lunch and stayed for some time afterwards. In the afternoon C & I played tennis with Mrs Crewe and Capt Kirklands both of whom annoyed C & me intensely. Had my photo taken by C with Robby's camera. Stayed at the club for some time later. Daddy played golf with Mr Richardson and then came to the club and M. came too.C dined with us. The Ramadan, Mohammedan festival began yesterday."

The following day was the beginning of the first long separation of the newly engaged couple as Granny writes:

There are no further references to Cyril in the diary until Friday, 20th July when Granny concludes her description of another afternoon of tennis when D (Dorothy I think) sprained her ankle with the words: "Miss Elder did Cyril's horoscope."

The following morning, Saturday, 21st July 1923, begins, "Had a fire in Cyril's room......D & I had tea with the Comerfords at the Regatta. Miss Elder had a cold so couldn't go. It was quite a good regatta, we got back about 7.30. Miss E went to bed for dinner. Rained all the morning and cleared up in time for the Regatta."

Riding, tennis and boating seem to be the most popular activities that Cyril and Elaine engaged in they also enjoyeed indoor games of patience and also music.

"C stayed in bed till about 12. I practiced for a biit. After lunch we played the piano and C sang and Miss E played for him. We 2 went to tennis at the Sands, Col Grout, Mr & Miss Caldecott & Major Drew were there. Had some quite good sets. Got back after 8. The others had begun dinner. Mrs R went to bed. We all sang songs afterwards."