Elaine Hooke (Granny to me and Ma to my father)  was born in India in 1900 and by 1947 had spent her whole life split between England & India. Cyril Hooke (Grandpa to me and Pa to my father) served there for many years, including throughout the war years when the two were separated, I think for its duration. After the war Granny was able to join Grandpa in Pulgaon, India for a short while.  (PHOTO: February 1947)

Pulgaon - Wikipedia    Note: Grandpa was the Commandant of the Military Stores at Pulgaon. Today the Pulgaon Central Ammunition Depot Camp is a military area and the second largest ammunition depot in Asia.

The current (August 2017) 70th anniversary of Partition and the terrible events of 1947 caused me to delve a little deeper into the family archive, mostly kept through Granny's diligence in holding on to documents, letters etc. Tucked away, deep in the Indian Army Ordnance's Corp Gazette of Feb 1947, I unearthed the following little gem. Granny would have been far too modest to reveal this but I think it speaks volumes about her character. Along with some letters from the children of the Pulgaon Labour Camp (also shown below), perhaps it goes a small way to explaining just why she took such exception to the film, "Ghandi", and its portrayal of the British in India, who were so very much her family and friends. It is evident from history that the British Government made some terrible mistakes in the way we left India, but many of the 100,000 British who were the final ones to depart India, signalling the end of British rule, included people like my grandparents who were very much loved and respected by the Indian people they both served and were served by.

(typed as printed in the Gazette)

20th Feb. 1947 will be remembered well in PULGAON.This was the day when Mrs HOOKE (wife of COL. C.G.HOOKE M.C.) left for UK. People of every degree including thirty officers - Military and Civilian - thronged the Railway Station to see her off. Our Commandant (Col. C.G.Hooke) is left behind all alone to look after himself as well as the biggest Depot in the East. Twenty or so B.O.Rs. leaving us due to the exigencies of "Scheme Generosity" constituted a fitting guard of honour to her. She had quite a busy week before her departure. Farewell parties in her honour, here there and everywhere, from Officer's wives down to the Labourers', where she was very popular for her welfare activities.

We have heard of such gatherings before, but the one at Mrs Milner's (wife of Lt-Col. W.E.B.Milner) was different. It was a thoroughly deserved tribute from Mrs Hooke's colleagues, without whom she said, she could not have done half what she did. We all from big to small wish her all the best and happy days amongst her children. The faces of those present at the station depicted signs of their inner feelings at the departure of so endeared and respected personality as that of Mrs. HOOKE. She will be remembered for good, for her best wishes to the families in th station in general and the little kiddies in particular. What this little lady did for this station was truly astonishing. She was everywhere and to some purpose. She had that "Something" about her, a sort of kindliness and understanding. One often wondered if she ever thought about herself, or spent her entire life thinking of ways and means to make other people's lives easier and pleasant.

When the CBM drew in, the whole mass of people moved up in a block. In the rear of the train O.O.C. Mr KAPOOR was seen working overtime.The enthusiasm and zeal the O.O.Traffic brought to the job was worthy of it. He wasn't any longer loading death dealing missiles, but was seeing about Mrs. HOOKE'S luggage making sure it went with her. It was a fitting farewell and testimonial to Mrs HOOKE's popularity and just appreciation of her work in the station. No "Bon Voyages" could have been more sincere than those extended to her.

Granny's own diary entries never do justice to herself! Her entry for 18th Feb refers to the above party at the Milner's, a large garland given to her and the little children dancing. Her entry for 20th Feb simply begins: "Arrive in Bombay at about midday..."

Grandpa's departure on leave was scheduled for May and the letters given him by the Labour Camp School, which both Granny and Grandpa clearly gave a lot of time to, reflect something of Grandpa's own sense of humour I think, as well as the genuine love and regard in which they were held. The children were clearly expecting his return and hoping that he would bring "Madam" back with him. 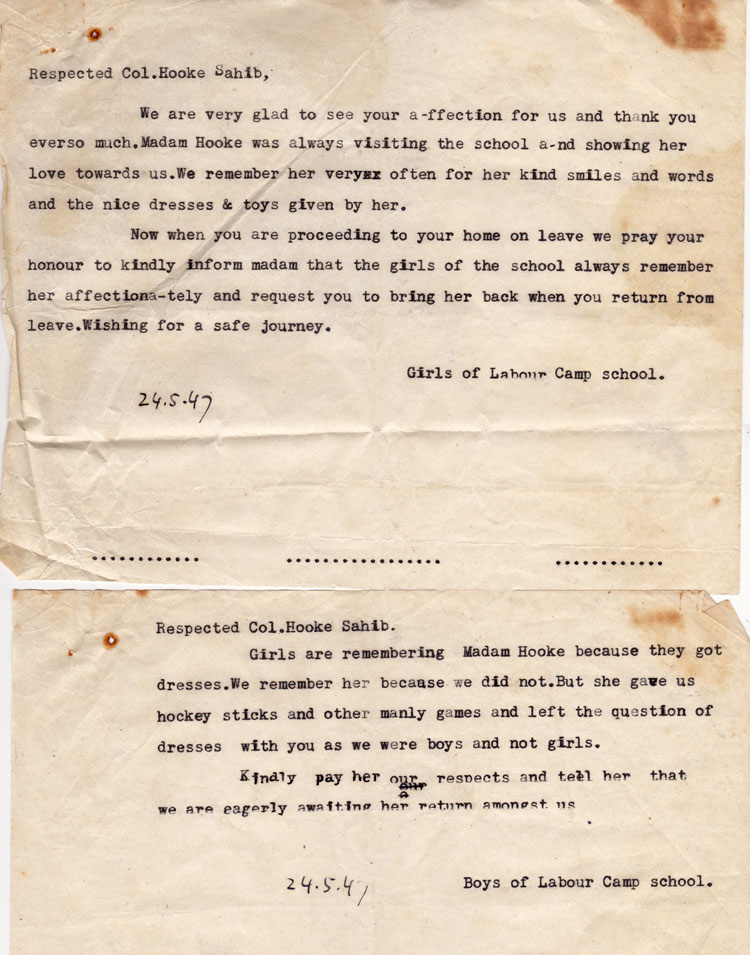 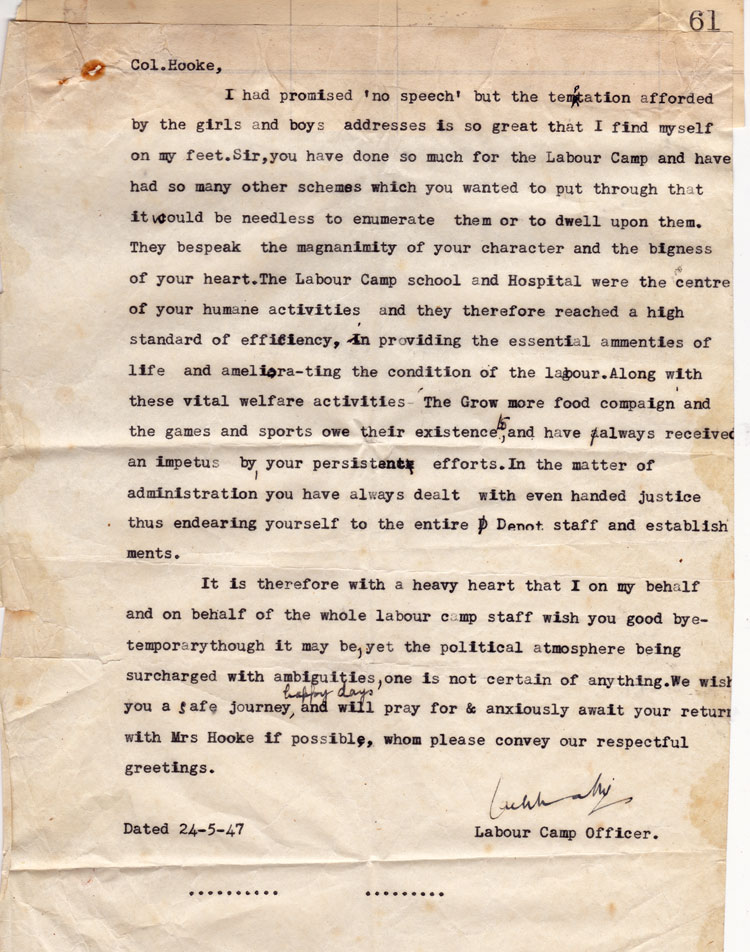 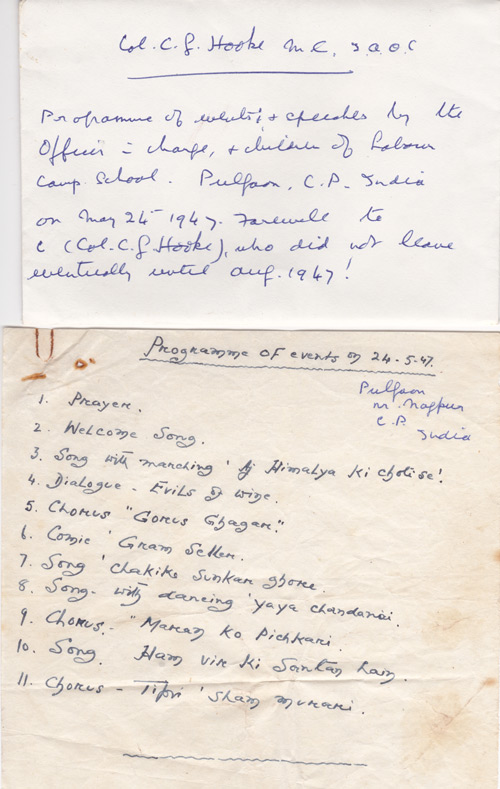 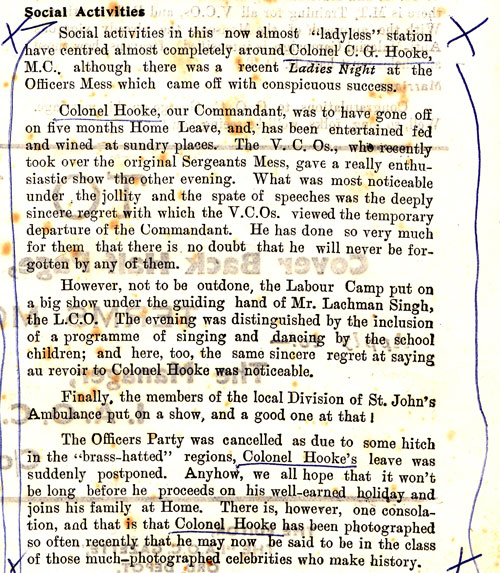 Also shown above is the report recorded in the Indian Army Ordnance Corps Gazette about Grandpa's departure with farewell parties held in May but his departure delayed until August.The political upheaval in India by then, with Independence and Partition taking place, was such that although the Labour Camp Officer hoped his departure was temporary, he recognised it might be permanent.