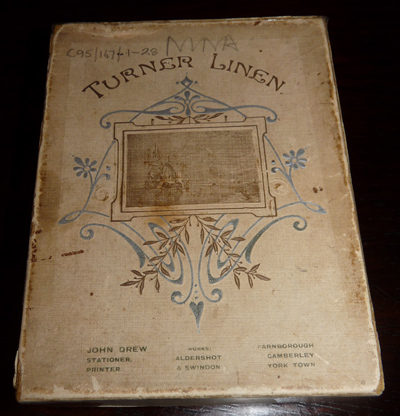 I have Farren's black and white photo negatives, carefully stored in a small box with each set of film negatives slipped into a brown sleeve, labelled by Farren with the location and the year. The most interesting of these, showing photos of biplanes, some taken from the air, were labelled Upavon and Netheravon. Online research revealed that Upavaon was the Central Flying School HQ and aerodrome on Salisbury Plain during WW1, with initial training taking place at nearby Netheravon. 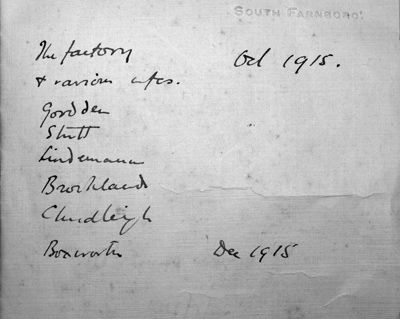 The story of how Farren found himself learning to fly from Upavon and Netheravon is fascinating and unfolded bit by bit with some information found online and a little more in his FRS biography, published after his death.

However, the fullest information emerged when I was checking online the contents of a box of Farren's papers which Lady Mildred Farren lodged at the Churchill Archives, Cambridge after his death. The list referred to a number of books, one of which was called "Testing Times - a study of man and machine in the test-flying era" by Constance Babington Smith, Cassell, London. 1961. Apparently, it is inscribed by the author as a gift to Farren and I guessed that a reason for this might be that Farren was one of Babington Smith's sources. I managed to obtain a second hand copy and my hunch proved right. Farren is quoted at several points with reference to his first exciting time at Farnborough from 1915-1918. This period was the very infancy of developing aeroplanes as war machines whilst marrying flying for fun to the new science of aeronautics.

I quote some relevant sections from the book.

In May 1914 the superintendent of the Royal Aircraft Factory at Farnborough, Mervyn O'Gorman, wrote an informal paper headed, "Testing Aeroplanes". It is one of the earliest commentaries on test flying. He began, "The testing of aeroplanes is an interesting subject to those who are to use them. It is full of small points which are easily overlooked." With the onset of WW1 O'Gorman lost no time in recruiting one of the best young fliers of the day, Frank Goodden, as his chief test pilot. He then set out to increase his scientific staff mostly by recruiting young men in their 20s from Cambridge. Many of them became Fellows of the Royal Society and several were later knighted but in 1915 they were young and unknown, excited to be part of a great new adventure.

One of Farren's photos of Farnborough, October 1915

George Thomson and William Farren joined Geoffrey Taylor. Another, Bennet Melvile Jones (known as Bones), was clearly a good friend of Farren's as he features in one set of Farren's photos which appear to have been taken at Bone's honeymoon cottage! Bones was one of the team, along with Herman Glauert, a mathemetician, Keith Lucas, a physiologist, and a slightly older (though still not yet 30) rather eccentric man, Frederick Lindemann, later Viscount Cherwell. Churchill called him "the Prof". Although a British subject, the wealthy, aloof and widely travelled Lindemann, either deliberately or naturally, had a distinctively foreign air.

These new young scientists worked with the pilots, but with considerable difficulty as none of the pilots had any scientific training and were only able to express opinions and feeling about flight rather than providing the kind of data and detail the scientists required. The scientists sometimes went up as "observers" to try and gain a better understanding of the pilot's viewpoint. Lindemann had no patience with these prima donna flyers for whom flying was more an art than a science.

The scientists pleaded with their boss, O'Gorman, to be permitted to learn to fly to conduct their own testing, but to no avail. O'Gorman insisted that pilots and scientists learned to co-operate; he maintained that the War Office would never grant permission so he never bothered to ask. Perhaps the real reason was that the one scientist he had allowed to fly, Ted Busk, had been burnt to death over Farnborough.

Everything changed during 1916 when Farnborough's status as a "Factory", yet being a Government-supported organisation, was considered unfair to the new aircraft industry. The political storm, churned up by the press, led to O'Gorman being made a scapegoat and he left Farnborough under a cloud.

Lindemann and Farren seized this potential opportunity. Without delay they concocted a letter to the War Office requesting permission to learn to fly and persuaded the temporary Superintendent to send it. Approval was immediately granted!

So, in September 1916, Lindemann, Farren and Lucas travelled from Farnborough to the Central Flying School at Upavon, Salisbury Plain, and began their training. 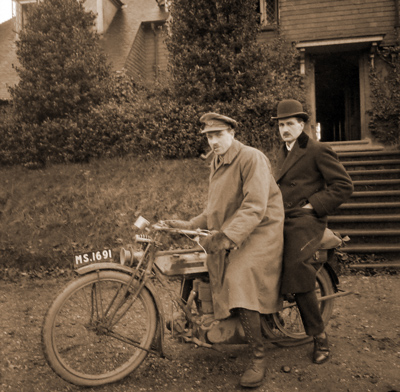 The bowler-hatted Lindemann on the back of a motorcycle, photographed by Farren outside Chudleigh, Christmas 1916. Identity of the rider uncertain, one of the "Chudleigh Mess".

"LIndemann, as usual, wore a dark suit and a high winged collar and looked straight from a city office. Sir William Farren has recalled, however, that Lindemann seemed completely indifferent to the "difficulties" of arriving at an R.F.C. station in a bowler hat and carrying an umbrella."

"Lucas and I were in khaki, and therefore, relatively inconspicuous, for which we were thankful. Lindemann was unperturbed, and, to our surprise, so was the R.F.C. Their instructions were to teach us to fly, and presumably did not extend to what particular kind of clothes we wore. Nevertheless, we felt it rather unfair that, purely because of our uniforms, we had to attend parades, and drill like the soldiers, whereas Lindemann was naturally excused."

"But there was a medical test to be passed before flying training could begin. In 1916, if a man passed the 'eye test' he was fit to fly; if he failed it he was not. Neither Farren nor Lucas expected trouble, but LIndemann had every reason to, for he was almost blind in one eye. When his turn came, however, he spent only a minute or two with the Medical Officer, and then rejoined his friends with a look of triumph.

'How on earth did you do it?' asked Farren.

'I went in, and he sat me in the chair, and while we were chatting I used my good eye to memorize the letters on the side of the card which I could see. When he started the test, I knew he would either leave it that way round or turn it over. He turned it over, so I shut my bad eye and read the new side without any difficulty.He then turned it the other way round, and I looked at it with my bad eye and read out the letters from memory. Of course, he might have insisted on which eye I used first, but I had to risk that.'

Lindemann was an excellent pianist and sufficiently good at tennis to compete at Wimbledon. He held elitist views and with his haughty manner was known as "Baron Berlin" by his detractors. He was a lifelong vegetarian, non-smoker and teetotaller,

"The catering at an R.F.C station in those days did not provide for vegetarians, and Lindemann was living largely on tinned apricots. Lucas said, 'If you go on doing that you will be ill', and sure enough, Lindemann was ill, and eventually had to stay in bed. But, as usual, in some way which seemed characteristic of everything he did, he got the better of circumstances, and was restored to activity."

During that late summer of 1916, as Lindemann, Farren and Lucas were enjoying their flying lessons over Salisbury Plain, there were other developments going on at Upavon. A young army officer, Henry Tizard, with a scientific background, had arrived at Farnborough and joined two others in developing a primitive bomb-sight. This was the almost accidental beginnings of research into the possibilities of using the aeroplane as a weapon.

Lindemann and Farren completed their training at the end of October 1916 but left Upavon grieving the loss of their friend Lucas who had crashed in flight and died on October 5th,

Lindemann continued flyng three or four times a week experimenting with 'bump recording and acceleration tests' once ending in a fence. He struggled with landings because of his poor eyesight and natural diffidence with anything that he wasn't sure he could do really well. He ignored convention, refusing to wear a flying suit instead flying in a dark suit with a stiff high collar. With his Germanic name he was not popular with ground staff and one chap, Jim Winter, revealed that he never filled Lindemann's tanks more than a quarter full expecting him to 'fly back to Germany' if they were topped up! He didn't actually fly in his bowler but it was never far from reach once back on the ground!

"... most of the scientist-pilots of the early days rejoiced in their flying, and even sometimes had their fun. When Farren got married Lindemann flew over to Cambridge where the wedding was taking place, and dropped a boot attached to a small parachute over the church door."

Lindemann and Farren, along with the small group of intrepid scientist pilots brought into to Farborough from 1915-1918, lived together at Chudleigh. There are several sets of photos taken by Farren featuring Chudleigh. 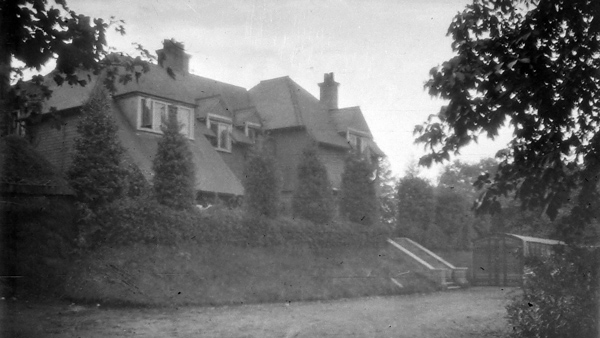 Click on the photo for more about "The Chudleigh Mess".

Both men went on to carve out extraordinary careers, each becoming Fellows of the Royal Society, highly regarded by Winston Churchill, with Farren knighted and Lindemann becoming Viscount Cherwell.

For much more about this period in Farren's life, along with more of his photos, go to: